It is official, Ebeye Gem Christian School has been awarded $91,000 from the Embassy of Japan to be used toward the building of three additional classrooms for the school.  On average, construction costs for one classroom runs about $38K due to labor costs, logistics of shipping construction materials to an island, and the cost of materials in general.  Construction will begin the second week of June, just after the school’s end of year graduation activities.

Japan recently held three Grassroots Grants ceremonies for Ebeye and Rairok schools, and Aur Atoll Local Government at the Japan  Embassy last month. For Ebeye, an agreement was signed for a $91,767 grassroots grant to build a three-classroom building in Ebeye for one of the private schools known as the Gem Christian School…officials from Ebeye that were at the ceremony were vice principal Noble Ned, Abita Joram, Kiton Loibwij, Tim Ned, Joel Clinton and Abring Jilly.

Gem School is a rapidly growing educational facility with over 170 students running grades K-5.   Next fall we will be adding a sixth grade and the classrooms are greatly needed to increase our capacity to hold this many students.

The island of Ebeye is so overcrowded that most children do not attend school at all due to lack of space in the school system.  Sometimes, due to lack of teachers and volunteers, there are schools where the students show up in class with no one to teach them.  It’s a dire situation and nations like Japan are doing what they can to assist Ebeye in their pursuit of a better life.  I personally find this admirable, as Japan is going through their own national crisis right now.

According to the article, Japan’s government has funded nine grassroots projects this year (April 2010-March 2011), and the total contribution to Republic of the Marshall Islands educational system at large is $811, 560.

Those of us here at Gem are incredibly thankful to God and to the Embassy of Japan for their monetary support. It is a blessing to us and to the children of Ebeye.

Sunshine.  Clear blue waters. Chicken marinated in soy sauce, brown sugar, green peppers and onions roasting over an open fire. Add to this recipe two truck loads of energetic third graders that love their teachers and life and you’ve got a barbecue oceanside to be rivaled. We had plenty of fun this past week when my third grade class headed out to the southern tip of Ebeye for an end of quarter Beach Party to celebrate their hard work this past school year.

We decided to venture out – we being Laura, Miriam (my sweet little third grader) and me – to the edge of the coral where the ocean waves were breaking.  During high tide we would need a boat, but low tide lent itself perfectly for some exploring.

Along the way, we came across some interesting creatures and scenes.  In the distance the ocean breaks over the coral ‘drop’ wall that runs around the island.

One thing I learned was that construction crews, at one time, planted explosives into the coral bed to blow out chunks of rock to be used to build the causeway which now connects Ebeye with Gueggegue island.  In doing this, the explosives left huge open ‘pools’ in the reef that become swimming pools when high tide moves out.  Beautiful and haunting oceanscapes to say the least.

There were dozens of these pools that we found ourselves weaving around as we made our way out to the breaking waves.

We caught all kinds of little sea creatures with our camera lens. But that was about as close as we ventured to some of the strange life we saw crouched in the little coral pools and hiding under rocks.

Completely friendly, this star fish that Miriam is holding is called a Brittle Star.  It’s always a good time for some educational input.

There were sea cucumbers strewn about everywhere, as far as the eye could see. While on our exploratory excursion across the sea bed, we met a friendly local who spoke some broken English.  He was collecting sea cucumbers to cook and sell and asked us a few questions concerning our homeland and visit to the islands. He was dark and thin, cigarette tucked handily behind his right ear. He handled himself like he knew what he was doing out here amidst the exploded coral pits, slug-strewn reef and foreign-to-me world.  One thing’s for sure, the Marshallese know these teeming oceans like Americans know rush hour traffic: what’s hazardous and the best way to avoid it is paramount.

Here’s a fine example of a lovely, yet hazardous Blue Black sea urchin. Poisonous, it’s menacing look prompted us to stay away – except for a quick dip with my camera. It’s spikes are hard as steel and are used to chip away at the coral to make little ‘nests’ for them to hide and stab things…like fish.  It wasn’t going to get any of us that’s for sure!

As far out as I felt comfortable venturing with a little one in tow, I dipped my camera underwater one last time capturing some interesting footage. 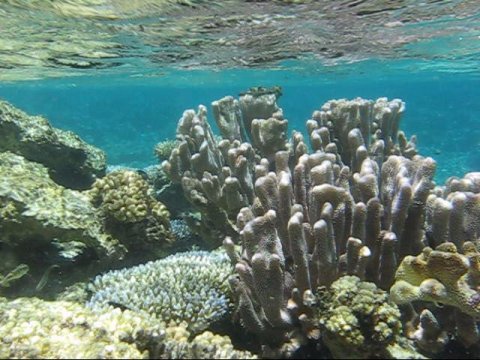 We headed back to shore but not without some lasting memories of a stroll across a fantastical seascape.  God certainly made this world and all its inhabitants with such creativity and wonder.  I stand amazed at his ingenious creations.  So detailed, so painstakingly thought over, down to the last whip of color, perfectly placed spike or carefully contoured edge of a leaf.  Absolutely beautiful.  Absolutely God.

It’s all in a day’s work at Gem School.  My third graders worked so hard on their food pyramid that I had to share it with everyone.  So here it is.. 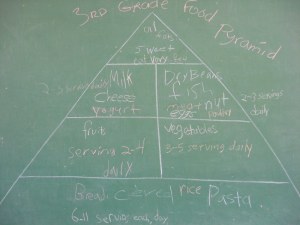 Isn’t it beautiful :)  It brings tears to my eyes.  I love their handwriting.  I’m so proud of my babies.

We’ve also been taking time to talk about all the events that took place in Japan surrounding the earthquake and how the tsunami could travel all the way to Ebeye through the water.  They got a mini education on ocean geography, wave formation and plate tectonics!  We watched a video on YouTube of the earthquake from inside a store in Japan. They had never seen anything like that before because Ebeye never has earthquakes. We pray for Japan almost daily and they are very much into knowing how the people are doing.  If I accidentally forget to pray about Japan, they quickly remind me. I love my kids.

They have worked hard all year-round but especially the third quarter. So we are celebrating by hitting the beach this Saturday with a barbecue and party.  They are all excited about it – and so are we!  I’ll post some pics of the time we spend hanging out and having fun next week.

Pastor Hone and Mrs. Gracie have returned from ministering in the states.  It’s good to have them back.  And they always bring back goodies to share.  I especially love the chocolate covered macadamia nuts from Hawaii.  What a blessing!

It’s really starting to warm up here…it’s been HOT.  Not much wind and the rain, which had been steadily blowing in once a day, has been avoiding us for three days now.  This year has truly been a blessing in regards to the weather; mostly rainy, cool winds, overcast skies and cool evenings. Cool meaning lower eighties, but believe me, that’s comfortable weather here.  I thank the Lord for it.

See you next week!

The sun is now setting. With less than two hours left on this road, I can see the destination that God is leading me too. The destination was not the purpose – no, the purpose was the journey. But everything has to end somewhere.

Or does it? Maybe things don’t end, they just…change.

Day doesn’t end, it just changes into Night. Yes, I’m seeing my destination and it’s changing into something beautiful.

“God wants us to look toward, and then beyond the horizon.”

Indeed, Pastor Hone, I heard that.

I heard that Lord. Everything is going to be all right.